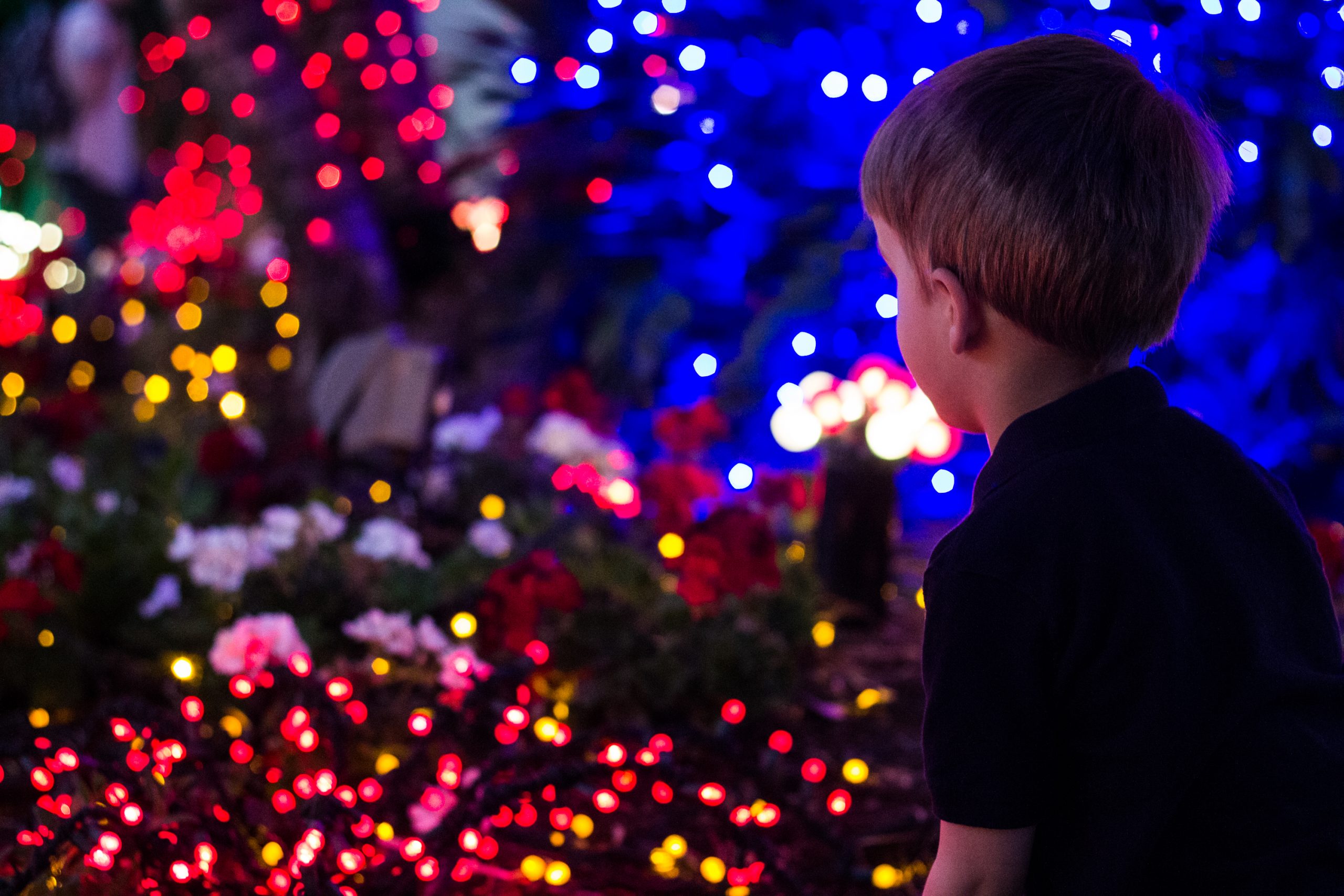 After a five-year hiatus, Mesa Temple Christmas Lights return this year to the renovated temple grounds for 37 spectacular nights – from Nov. 25 through Dec. 31. The lights are on nightly from 5 p.m. to 10 p.m.

The event – previously called one of the “must-see holiday lighting extravaganzas in the United States” – has drawn over a million visitors annually from across Arizona and far beyond to partake of the Christmas spirit on the sacred grounds.

This year, a team of nearly 100 dedicated committee members and countless other volunteers from 63 stakes from the Mesa, Phoenix and Gilbert temple districts will make this event not only one of the largest known volunteer-driven Christmas lighting displays in the country but they help to bring back a beloved community tradition since 1979.

“Our mission is to humbly and worthily create sacred Christmas displays, in music, and lights, which reflects the beauty and integrity of the temple, inviting all people to feel Christ’s Spirit,” the committee’s mission statement says.

For more info on the Christmas Lights, click here!

And having it on sacred temple grounds adds to that spirit.

In 1927, as President Heber J. Grant dedicated the temple, he prayed not only for the sacred edifice, but also for the ground on which it stands and that all who would come, whether members of the Church or not, would “feel the sweet and peaceful influence of this blessed and hallowed spot.”

This year, everything will be decorated with LED lights north of the terrace level of the temple to Main Street, to LeSueur on the west, and to Hobson on the east.

“We have more than doubled our footprint,” says Stacey Farr, who began serving as an assistant director of the lighting event 10 years ago and became director in 2015. Stacey and her husband, Gary, are both church service missionaries.

Reflecting on the history of the lighting event, she recalled when, in 1979, Temple President L. Harold Wright envisioned the event as a “gift to the community” and one that would add a spiritual element to the community’s celebration of Christ’s birth. It started with a few thousand blue lights outlining the roof of the old visitors’ center. In memory of these origins, the north reflection pool – where the old visitor’s center was located – will be outlined with blue lights. In addition, large white nativity figures will be set in the pool with the temple reflecting behind it.

Other plans include balls of orange Christmas lights dangling from citrus tree limbs; white lights hanging high in palm trees; a variety of colored lights adorning ground-level areas and raised planters, replicating flower blossoms and stalks; and hundreds of thousands of lights in blue, red, purple, gold and white twinkling and glittering on trees and shrubs, illuminating the grounds of the Mesa Arizona Temple throughout the holiday season.

Regular attendees to past years will recognize favorite Biblical displays, including Mary and Joseph on their journey to Bethlehem and the prophet Isaiah prophesying of Christ’s birth (both which have been a part of the event since 2005), In addition, the Woman at the Well, Lost Sheep, Shepherd Boy, and Gift Givers and will be nestled among the olive trees north of the temple with QR code stands (added in 2015) that visitors can scan with a cell phone and be linked online to Church-produced videos that give deeper insight to the scenes. Each vignette will have its own audio system playing accompanying music and narration.

The larger-than-life three lighted wisemen and their camels will return to the north lawn.

The near life-size Italian Fontanini nativity figurines (added in 2000) will find themselves in a redesigned stable to allow viewing from a wider angle in a grassy area at the northwest corner of the temple. The Italian figurine designer and painter Emanuele Fontanini started his company in 1908 and four generations have specialized in handcrafted, hand-painted nativity figures, which have become Christmas symbols throughout the world.

Many of the other figurines featured in the separate vignettes are also Fontanini designed.

Easily visible will be the new star with thousands of lights shining brightly above the crèche, which is near the road on the west for people who may not be able to walk around the grounds to see the entire scene while driving by.

Another consideration by committee members this year was making the lighting event special for visitors even during the day.

“People sit, ponder and read their scriptures throughout the day,” says Stacey. “Our goal is that temple lights display and these vignettes are going to be as impactful in the daytime as they are as night because the life and teachings of Jesus Christ is what this is all about.”

Through the years that the temple and grounds were being renovated, designers considered how to plan for the lighting event, even though official approval of their return didn’t come until 2021. Since then, many, many hours have been spent going through the hundreds of thousands of tiny lights and creating new plug-in flower bouquets and other ornamentations.

Suzette Tyler, with her husband Loren, were called as church service missionaries and Suzette will become director in two years.

Reflecting on the impact of her opportunity to serve, Suzette recalls: “I’ve had these moments where inspiration has just come on how to decorate an area.” Her husband, a fabricator, has helped bring those ideas to life.

Stacey adds, “The Lord is in the details of everything to do with Christmas lights. It’s about Him. It’s about His love for His people. We’re decorating His gardens to celebrate His birth.”

Both women have been overseeing the work provided by needed volunteers who come to help prepare for the event.

Especially helpful have been members of local Young Single Adult wards who have been using their Monday night activities for months to help with the work.

“If we didn’t have these young people, temple lights could not work,” Stacey says. “They are our backbone!”

All of the volunteers who show up with helping hands are important and make the event possible.

“The impact of these people – the time they graciously give – is tremendous,” says Sister Farr. “They give and give weekly, in the (warehouse) building, on the grounds, at home (working on projects).

And many return again and again to continue helping with the work.

“You can’t come and not feel joy; you can come with burdens on your shoulders and feel like you dropped them off and go back home feeling the gift of Christ in your life,” Stacey says.

During the 37 days of the event, there will be nearly 175 people helping each night.

Putting lights on some of the taller trees will begin in September, but Nov. 5 will be the first Super Saturday when the lights placement begins in earnest.

The public lighting event is held nightly from 5 p.m. to 10 p.m. and everyone is welcome.

In 2017, the last year of the event before the temple renovation, it was estimated 1.5 million visitors viewed the Christmas lights display during the time between Thanksgiving and New Year’s Eve.

In addition to the lighting event on temple grounds, nativity displays — featuring more than a hundred nativities from nations and cultures from all over the world — will return this year. They will be hosted in the multipurpose room at the Mesa Temple Visitors’ Center, 455 E. Main Street, (just across from the northwest corner of the temple grounds) throughout the Christmas season. 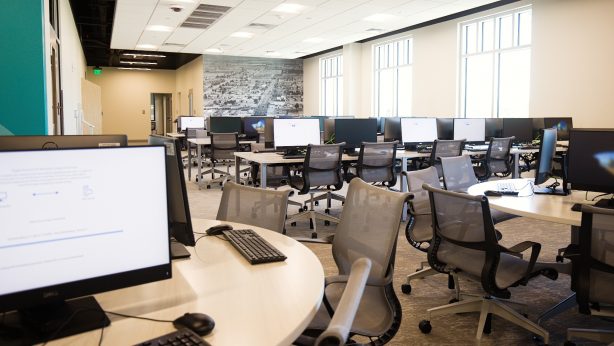 FamilySearch at the Mesa Temple Visitors’ Center is a FREE... 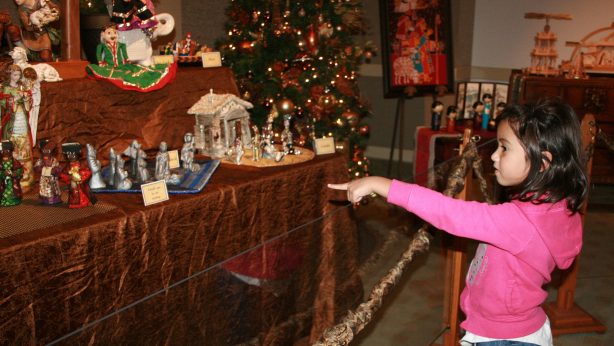 As the outdoors surrounding the Mesa Temple dazzle with hundreds...